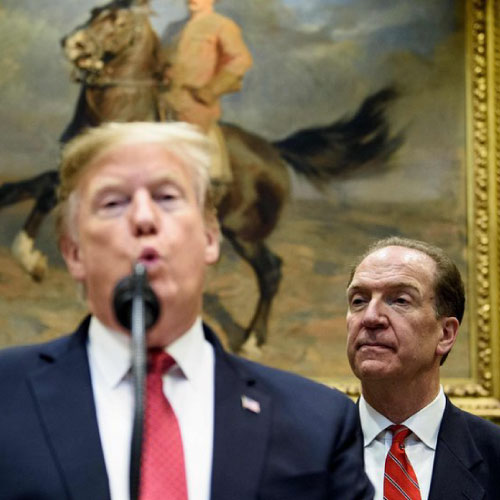 The World Bank executive board this month unanimously approved as its new head David Malpass, the U.S. Treasury under-secretary for international affairs.

Once again, an opportunity has been missed to create a precedent by naming a non-Western official to a post with huge impact on the economic progress of emerging countries.

The leadership of the most important multilateral organizations continues to be monopolized by Western representatives. Since 1946, the International Monetary Fund and the World Bank have been run by Americans and Europeans, respectively. Numerous other international organizations, from the World Food Program to the United Nations Department for Peacekeeping Operations, follow the same tradition of appointing Western officials.

The "rules-based world order" is, in fact, poorly veiled code for preserving the Western-led status quo. But international resentment is growing, and will inevitably trigger long-overdue change. It would be wise for Western powers to start embracing this shift and share power to reduce the risk of clashes.

Beyond leadership, the practices of multilateral bodies reinforce Western dominance. For example, the International Criminal Court, based in The Hague, has largely focused on prosecuting African defendants. Any attempt to take action against potential Western criminals is often resisted. When the ICC moved to investigate allegations of war crimes committed by the U.S. and allied forces in Afghanistan, John Bolton, Trump's national security adviser, threatened that the U.S. would impose sanctions on the court and seek to prosecute its officials. This amounted to exempting the U.S. from international law.

Clearly achieving a more equitable and democratic global system requires a rebalancing of power. This is not to suggest that the West should be sidelined. But the rest of the world must be given a proportionate voice in international affairs.

A good way to start would be to give India -- the world's second most populous nation and its third largest economy calculated on a purchasing power parity basis -- its rightful place on the U.N. Security Council. 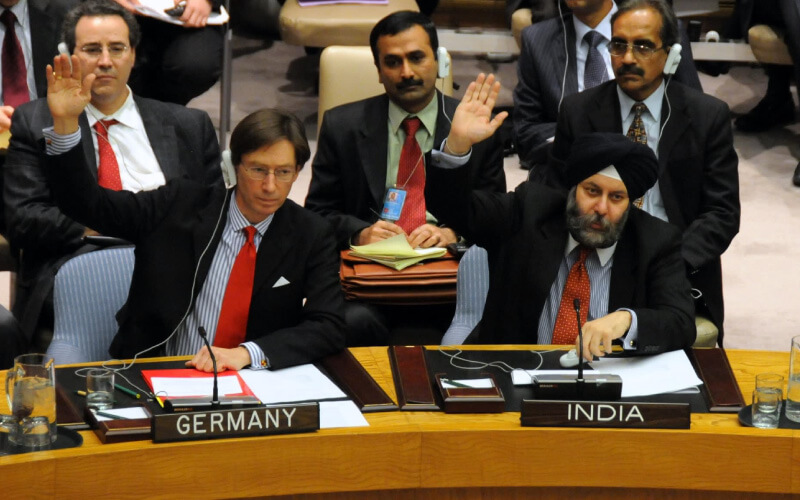 Top-level multilateral institutions such as the World Bank must also be removed from Western hegemony. Sharing power proportionally with the non-Western world is inevitable.

Non-Western institutions should be allowed to compete with Western ones. These include two based in Beijing -- the Asian Infrastructure Investment Bank, which has 70 member countries, and the eight-member Shanghai Cooperation Organization.

These Asian-led organizations remain hampered by the need to gain Western acceptance to avoid exacerbating divisions. It is important for these new multilaterals to operate successfully in areas of Western influence and in partnership. That would ensure the West remains engaged, but not dominant, and would reduce the risk of systemic clashes.

Western-led multilaterals must accept a diversity of ideological and cultural perspectives. This does not mean ignoring blatant violations of human rights and international law, or scrapping rigorous lending criteria. But multilaterals can no longer operate solely on the basis of the ideology of market liberalization, which has marked the Western-led Washington Consensus.

The West must recognize that multilateral institutions must change as developing countries become significant global players, which means adopting development ideas that align with their ideological positions as well as political realities.

For example, multilateralism is the cornerstone of China's Belt and Road Initiative, with the AIIB giving it priority in its $3.5 billion investment budget in 2018. Yet Italy's plan to join the project has alarmed its allies in the G-7 group of leading industrial nations. They blatantly seek to protect existing multilateral structures from challengers.

The shift in global rules to reflect the emergence of new powers must include the international justice system. New international criminal courts are emerging which are not limiting themselves to Western rules.

For example, the Tanzania-based African Court of Justice and Human Rights is the world's first regional court with jurisdiction to examine genocide, war crimes and crimes against humanity, giving it potentially greater jurisdiction than the ICC in Africa. The ACJHR has so far been ratified by only nine of the 55 states of the African Union. It has been criticized for granting immunity from prosecution to heads of state and senior officials. But Western powers could help overcome such problems if they would treat developing countries as partners.

The global justice system also relies on economic sanctions that are often readily invoked by the West against "hostile" countries or ones viewed as seen as breaking international agreements or denying basic rights.

Other approaches should be developed. For example, China and Russia blocked U.S.-led attempts to impose fresh U.N. sanctions on Myanmar over the Rohingya Muslims crisis in Rakhine state. But Beijing then mediated a memorandum between Myanmar and Bangladesh that governed the return of refugees to Rakhine, although difficulties remain in its implementation.

Asia is now home to three of the ten largest economies in the world on a PPP basis, so imposing Western values by weaponizing finance will grow harder. This will encourage the exploration of new diplomatic avenues by non-Western countries.

Lastly, the privileged position enjoyed by the U.S. dollar as the world's primary reserve currency must end to reflect the growing importance of other major currencies. This would also curb America's ability to use dollar trading as a foreign policy tool for imposing sanctions.

Currently, the dollar's global role allows the U.S. to run sustained trade deficits without facing an economic crisis because it imports and borrows in its own currency. Washington also uses the dollar's pre-eminent position as a competitive weapon in trade, benefiting from the dollar pricing of oil and other commodities.

The Chinese yuan's role is already growing, despite Beijing's unwillingness to allow the currency to float freely. Further change in the global currency pecking order is inevitable as more countries amass holdings of currencies other than the dollar. The U.S. will lose its ability to impose its monetary policies on others.

Awareness of the need for balance in global power systems will grow as people in the non-Western world become more informed about the injustices of the current order.