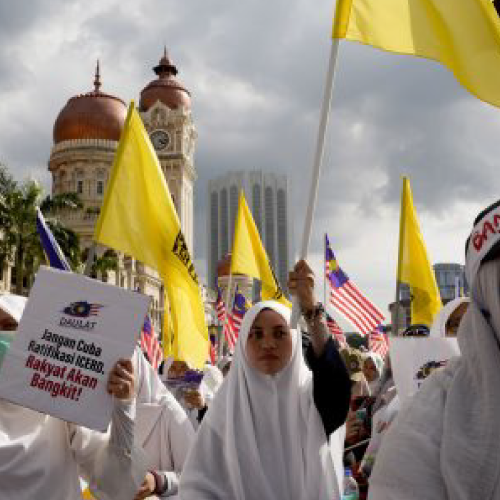 For the second time in almost as many years Malaysia has a new prime minister. And yet again it is looking to a 94-year-old man to resolve the latest political crisis, described by many as a silent coup. The relationship between Mahathir Mohamad and his former deputy Anwar Ibrahim (himself over 70) is still — as it has been for decades — the locus of Malaysian politics, including in relation to the latest farce. With no disrespect to either of these politicians, it’s worth asking: Is there really no other politician competent enough, or even just politically savvy enough, to drive Malaysian politics?

It seems the people who voted for change two years ago have been short changed and left with a prime minister that many did not vote for and now do not trust. The current political chaos in Malaysia has confused and bemused most Malaysians and many international observers. But beyond the day-to-day breaking news alerts and rumors, there are deep structural issues in Malaysian politics that remain unresolved and have precipitated this latent crisis.

The truth is that politics in Malaysia is stunted. Who among the Malaysian political elite can feasibly claim to run a clean and competent government? Certainly not new Prime Minister Muhyiddin Yassin, who does not have a good reputation, having been accused of corruption going back to when he was the chief minister of the southern state of Johor, next to Singapore. The people Muhyiddin has enticed to join him to form a new government are some of the most mistrusted figures, entangled in the scandals of the last few years. This lack of credentials among candidates is deeply concerning and does not bode well for the future of the country.

The dearth of political leadership has held back the country’s growth for years. Malaysia has long been labelled a rising star of Southeast Asia, yet has repeatedly fallen short of both domestic and international expectations. Perhaps this is no surprise considering its shadow economy is valued to be 21 percent of GDP, or 300 billion Malaysian ringgits ($72 billion). The corruption crisis came to a head in 2015 with the 1MDB scandal. This scandal was so big that it finally toppled the rule of the Barisan Nasional (BN) coalition, which had governed Malaysia since independence – 61 years of one-party rule in the guise of democracy. But even then, the Pakatan Harapan coalition that defeated the BN still had the familiar faces of Mahathir and Anwar at its head. And now after the PH’s implosion in the last week the BN seems to be engineering a return, with some of the same old cronies.

The core issue of Malaysia’s stagnation remains the country’s treatment of race. The former Singapore Prime Minister Lee Kwan Yew once famously said that Malaysian politics will always be based on race. Given its unique multicultural heritage that is not surprising, but politics need not be racist at the same time. That sadly seems to have become the norm amongst the political elites and was on full display in recent months.

Malaysia practices affirmative action for the bumiputra, enabling the livelihoods of Malay Malaysians by granting them quotas in public education, mortgage reduction benefits, and even roles reserved in the public sector for them. It is the only country in the world whose majority population enjoys affirmative action aside from South Africa (which suffered from a century of racial oppression at the hands of a minority). But this chauvinism is also expressed in a number of unwritten rules: namely that the position of prime minister and all prominent government positions must go to Malays. This is at the heart of Malaysia’s rot and has stymied the development of political talent. It has also led to Malay elites dominating a predominately rent-seeking economy, in which elites from all other races in turn feel enabled to exhibit this self-serving behavior, thus making everyone complicit.

Of course, in order to bring about change, the Pakatan Harapan coalition violated some of these unwritten rules. It nominated two minority race politicians to prominent ministerial positions: Malaysian-Chinese Lim Guan Eng to the finance minister, and Malaysian-Indian Tommy Thomas as attorney general. The latter resigned last week after months of being attacked on racial grounds.

And in response to the PH victory, the now-opposition party UMNO has started to rebrand itself as an explicitly pro-Malay party. In October 2019, four public universities organized the “Malay Dignity Conference,” during which one academic said — with a straight face — that “Malaysia is for Malays” and that the social contract with non-Malays could be revoked. This was claimed with no grounding in Malaysian or international law. In any other democratic country, this would be seen as racism at its worse and even legally contestable.

The new prime minister is on the record as saying that he is “Malay first and Malaysian second” when it should be the other way around. Although there are many urban educated Malays who reject this sort of thinking, few have spoken out. Only Mahathir was willing to tell the pro-Malay audience that minorities were not to blame for their struggles. Yet in the new Malaysia which is being born — despite the current crisis which suggests the country is regressing — it is important to understand that most Malays do not support such outward racism. They understand the reality that theirs is a multicultural country and want to live and thrive in the unique cultural fabric that Malaysia offers. Yet the leaders of the Malay parties seem completely out of touch and are alienating their base with their self-serving agendas, which are not aligned with the majority of Malaysians.

Malaysia’s affirmative action policies started from what were good intentions: a wish to improve the circumstances of poor rural Malays, in the hope of redressing inequalities of the colonial era and staunching the racial tensions (including race riots) that plagued cities like Kuala Lumpur, Singapore, and Jakarta. But if the goal was to elevate poor Malays, these policies haven’t worked, and have even largely backfired: independent groups suggest that Malaysia’s effective poverty rate is still around 15 percent, much of that among the Malay population. Mahathir has for years lamented the lack of progress in uplifting deprived Malay communities, but even he has not been willing to admit to the failings of race-based economic policies.

The system of affirmative action has evolved into one of the root causes of Malaysia’s corruption and political failings. By tapping into pro-Malay feelings, Malay politicians and ideologues have secured their own positions, allowing self-enrichment through rent-seeking and corruption. Institutional development suffers, private companies thrive on the basis of their government connections, and political advancement is not based on merit.

This has affected Malaysia’s society in its entirety, across all races. Why has Malaysia’s education system become substandard, particularly for poorer communities, when it was once considered among the best in Asia? Why have wages stagnated for the lower income groups, while living costs rise? Why has Malaysian Airlines, once widely respected, become an airline that can’t even be sold? What about the situation of the Orang Asli, Malaysia’s seemingly forgotten indigenous population?

But the reality is that the people who have experienced the most setback are poor Malays – the very same communities whom Malay politicians claim to represent. Malaysia’s minority communities are discriminated against under the country’s system of affirmative action, but Chinese and Indians have found a way to be resilient and even thrive. Many have done very well in Malaysia’s private sector and civil society, finding niches in which to flourish. However, poor Malays suffer from a government that has held them back using race-based policies. Malaysia’s government does not uphold a truly meritocratic society; invest in public services to prepare its citizens of all races for the future; nor build governing and political institutions to ensure a well-functioning society. In truth, many poor Malays are lured to support politicians by the promise of race-based privileges that they often never even receive.

Those who live in countries with their own racial politics may see some parallels: politicians that appeal to the majority’s wish to preserve their own privileges, and use that political security to enrich themselves. Malaysia’s racial politics may be explicit and institutionalized, but it is certainly not unique. Look at the United States, where appeals to white superiority are consistently used to prevent solidarity between poor white and non-white communities.

Despite Malaysia’s malaise, there are clearly those, both inside and outside of politics, who are committed to the equal growth of the country and all of its inhabitants. For all of his many flaws, Mahathir appears to take that responsibility seriously, and was certainly competent enough to run the government. But he is also 94 years old: Malaysia needs fresh young leadership to ensure that the electoral wishes of voters two years ago are not hijacked and squandered by those responsible for the shenanigans of the last two weeks.

Millions of millions of Malaysians, of all races, are holding their breath and giving the political process a chance. They look to the future with trepidation: will business-as-usual continue with corrupt leaders, or will the growing public demand for better governance finally oust the Malaysian rot, fulfilling the people’s wish of creating a New Malaysia? And most importantly, will the new prime minister reject the race-based policies that are at the heart of the country’s woes? Will he be willing to now say that as prime minister he is “Malaysian first and Malay second”? If he does, he will win the trust of the majority. But does he have the courage to do so?