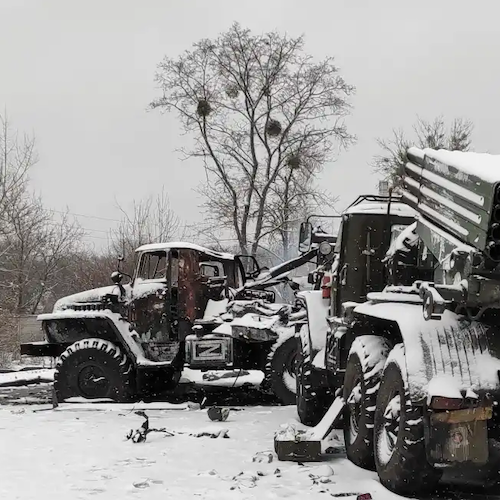 Wars are only evil when Westerners are the victims Destroyed Russian Army rocket launchers in Kharkiv, Ukraine, on Feb. 25: NATO helped trigger this conflict and America is fueling it with $13.6 billion in aid. Photo: Reuters

The Russia-Ukraine crisis has rapidly been established by Western commentators as a tipping point in global affairs, supposedly signifying a new world order.

This is largely addressed from two archaic angles. First, a deepening of the existing world order, with America and Europe aligned on one side, and Russia and China aligned on the other. Second, the fear that the West is losing its grip on the world, and that this is a significant threat to global security.

There is however a more contemporary angle that is being missed: amid the tragedy, the birth of a new world order that may be better equipped to prevent and resolve crises like Russia-Ukraine. Why? Because it will be a world with more equal power-sharing that will no longer be dictated by the narrow interventionist interests of the West.

These interventions have spanned the tragedies of the 21st century, including Iraq, Afghanistan, Syria, Libya and Yemen, yet these did not elicit the pious posturing of Europeans and Americans as Russia-Ukraine has. The mindset remains the same: wars are justified and tolerated if led by the West because it supposedly has a noble mission.

This is reinforced by propaganda about liberating repressed peoples from fascists, communists, or religious fanatics, which helps the Western public disregard atrocities committed by their governments. This willful ignorance is also fueled by a deep-seated belief in the Western public's psyche that white lives are more precious than those of others living in countries considered to be unpleasant. The hypocrisy and racism of reporting on Russia-Ukraine has made this abundantly clear.

For the first time, this duplicity has been exposed to the global majority by social media and other tech-enabled forms of communication. Hundreds of thousands of videos and messages have reached every corner of the world, as Arabs, Indians, Chinese, Africans, South Americans have the scale of this hypocrisy made crystal clear.

This is helping to combat centuries of Western propaganda, which portrayed white Westerners as superior, righteous, civilizing and the natural leaders of the world -- a perpetuation of white privilege stemming from brutal colonial exploits.

The sheer influence of this system was previously only recognized by some, but now there is a global conversation taking place about why the West is depicting the civilian tragedy of this conflict as somehow incomparable to other conflicts. This discourse is leading hundreds of millions to new understandings of current events and to not simply accept the one-sided Western version.

No one denies that it is utterly horrifying and inexcusable that people are dying. But the virulent reactions by Western media, politicians and businesses have completely blanketed attempts to understand Russia's motives and the events leading up to the war. What about NATO expansionism and provocation, the preexisting separatist movements in Ukraine, or the white supremacy of Ukrainian politics? How can we achieve peace without understanding these key elements?

Yet other conflicts are passed over. Take Yemen, for example, where the U.S. Navy has backed the Saudi-led naval blockade, which humanitarian organizations have argued was the main influencing factor to the outbreak of famine, which 5 million faced during the civil war. A family eat breakfast outside their hut at a camp for people displaced by the war near Sanaa, Yemen, in September 2016. Photo: Reuters

Yet, Westerners and global media did not seem to care, and this was hardly discussed. It was normalized as part of another conflict in the Middle East, where poor, uneducated Muslims were killing each other, and the U.S. was justified in its actions. Now, the Western-led International Criminal Court has rushed to investigate war crimes in Ukraine yet has done nothing with regard to Yemen or anywhere where the West is the aggressor.

This also demonstrates how much power the global media agencies, which are mainly Western, have with relation to how conflicts are understood. In Ukraine, they have sought to galvanize a unified emotional response from the Western public rather than painting a complete picture of this extremely complicated issue. This depiction mirrors the illegal invasion of Iraq, where American soldiers were lionized for "spreading freedom," while minimal coverage was provided on the death and destruction inflicted on hundreds of thousands of Iraqis by Western armies.

This raises a question: why are Western societies so willing to accept what their media tells them about wars, Russia-Ukraine in particular? It would appear that they are desperate to have an enemy. America has been at war for almost 95% of the time since its independence, while European nations have triggered the largest wars in history.

And as Georgi Arbatov, adviser to five General Secretaries of the Communist Party, said in 1988 during the fall of the USSR: "Our major secret weapon is to deprive you of an enemy." To the global majority, the collective West seems delighted to have a boogeyman to rally its people against Cuba, Chile, Vietnam, Congo, the Middle East, China and now Russia returns for an encore 40 years later.

This helps explain why the collective Western psyche appears to be in active denial about the events leading up to this war and has little interest in exploring viewpoints from the other side.

Europeans, in particular, must change this mindset because de-escalation will be aided by empathetic European diplomacy and not self-righteous American intervention. As inconvenient as it is to acknowledge, NATO helped trigger this conflict, and America is fueling it with $13.6 billion in aid, which includes military equipment. Without an understanding of the complexities, diplomatic efforts will be sabotaged, and the war will continue, with ruinous impacts on the continent.

Reactions to events in Ukraine have revealed to the wider world a deep-seated Western superiority, particularly with regards to the lesser value of non-Western lives and the right to intervene in other countries.

Now, the non-Western world is refusing to accept the West's selective sense of morality, and this is perhaps the biggest shift arising from the tragedy in Ukraine. It may yet be the silver lining for a world in dire need for narratives not steeped in the preservation of white privilege.