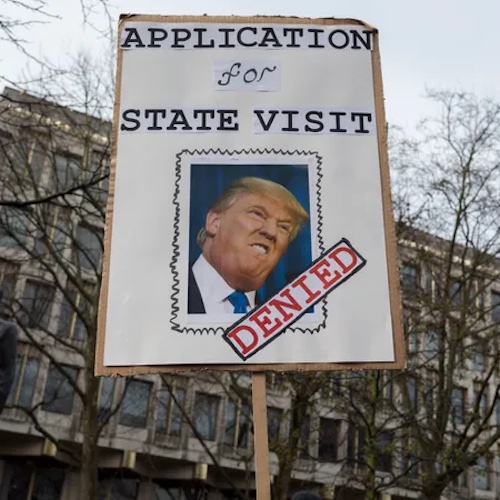 It's Time For World Leaders To Put Trump's America 'On Notice' In London, thousands demonstrated against Trump's Muslim ban and demanded U.K. Prime Minister Theresa May not collude with him. Feb. 4. Photo: Richard Baker via Getty Images

The list of countries and international institutions the new U.S. president and his cabinet have affronted in just three weeks ― China, Germany, Mexico, Australia, France, Iran, the United Nations, the European Union and others ― should indicate how far this administration is willing to go in talking tough with the rest of the world. In response, the world should now get tough with America, and let it know that the global majority will no longer be pushed around.

The protests in London Monday against the British government’s decision to offer U.S. President Donald Trump a full state visit should put the U.S. “on notice” that people around the world are not going to stand by and allow their governments to give America a free pass despite its unacceptable actions. Governments around the world should be emboldened and no longer fearful of standing up to America ― unlike the U.K. government, which has once again ignored the voice of the people (remember Iraq war).

Despite the talk about America’s soft power, it has acted more like a bully in the international arena. Trump is simply the most recent and overt face of that. Do not forget that his immediate Republican predecessor, George W. Bush, with great arrogance and ignorance, unleashed a catastrophe in the Middle East. The 2003 invasion of Iraq continues to destabilize the region almost 14 years later.

This bullying is a natural byproduct of American politics. Trump’s Republican colleagues acted little better during the campaign or during confirmation hearings for his nominees. Senator Ted Cruz, during the primaries, talked about bombing the so-called Islamic State “back to the Stone Age,” despite the potential for collateral damage to innocent people. Nor is this purely an issue with Republicans. Even former President Barack Obama, a decent man who could view America’s experience with a measure of humility, still launched a destabilizing intervention in Libya, tacitly supported a bloody Saudi intervention in Yemen and relied on a program of targeted drone strikes around the world ― a program now in Trump’s hands.

"If the U.S. moves its embassy in Israel to Jerusalem, U.N. members should threaten to move the headquarters out of New York."

The outrage around Trump’s comment on Fox News that the U.S. was not “so innocent” is an example of how American exceptionalism has distorted any reasonable conversation in the U.S. You can disagree with the political point he was trying to make, but the idea that the U.S. has influenced elections, invaded countries and killed people should not be controversial. It’s a known fact and certainly a view that the rest of the world holds.

But the implication that America isn’t “innocent” was perhaps the only comment to unite both the American right and left in their criticism of Trump: a collective denial at the heart of its distortion of the facts of history. Even liberal media outlets leading the anti-Trump campaign could not bring themselves to say that, for once, he had spoken the truth.

This behavior has been emboldened because the U.S. has, for far too long, gotten a free pass from the rest of the world. The Iraq war was a catastrophe, but it was one the world largely forgave as soon as Bush left office. America’s main allies, especially NATO member states and others like Japan, have played a key part in perpetuating this and thereby doing a disservice to the U.S.

"If a Muslim ban is reimposed, politicians, businessmen, athletes and academics should refuse to attend events on American soil."

It’s time the world revoked this free pass through tough talk, civic action and political sanctions in a coalition of the mindful. Given the myriad ways the U.S. could use its power and privileges to upend international politics, the world should be specific: sanctions will be imposed because of a specific policy and will only be revoked when the policy is repealed.

For example, if the U.S. really does tear up the nuclear deal with Iran and impose new sanctions unilaterally, Europe and China should refuse to follow suit. Other countries should be free to trade with Iran based on their national interests, and the international community should stand together on this.

If the U.S. decides to withdraw from the Paris climate change agreement, the rest of the world, led by China and the EU, must continue without it. If the U.S. really does move its embassy in Israel to Jerusalem, members of the U.N. should threaten to move the headquarters out of New York ― or at least host September’s General Assembly in a different city. At a minimum, diplomats should shun Trump’s speech.

"Imagine if top tennis players boycotted the U.S. Open, like cricket and rugby players did with tournaments in apartheid South Africa."

If the U.S. really does try to reimpose the travel ban on people from a few Muslim-majority countries, the world’s politicians, businessmen, athletes and academics should refuse to attend conferences and events on American soil. Global events should look for locations outside the U.S. If the U.S. really does place substantial tariffs on Mexico or China to further its own domestic political aims, the world should consider alternatives to the dollar as the world’s reserve currency.

These sanctions are provocative. However, Western countries, led by the U.S., have long believed that these sanctions — economic, political or social, either by governments or societies — can change a government’s behavior, even if they harm ordinary people. At the very least, it is a statement that a country’s actions are beyond the pale. The world has tried these tactics before ― against apartheid in South Africa, for example. Imagine if top tennis players boycotted the U.S. Open, like cricket and rugby players did with tournaments in apartheid South Africa.

American politicians and diplomats need to be sent a message that, as much as the world needs and wants a strong and stable U.S. playing its rightful role, the U.S. needs the support of the rest of the world just as much, if not more. If push comes to shove, the world can and must construct a new world order that does not treat the U.S. as the first among equals.