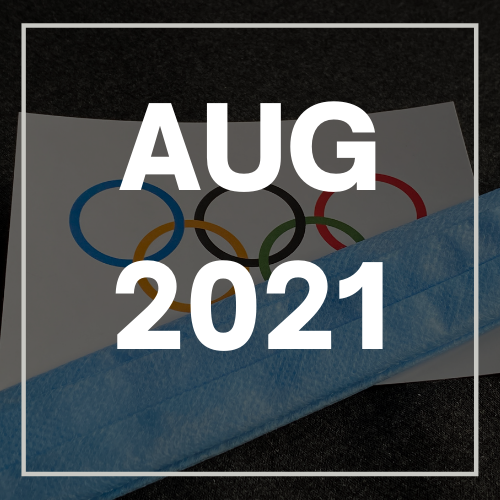 The month of July saw several events of note, the most prominent being the kick-off of the Tokyo Olympic Games. This year’s Olympics has been as much a celebration of sporting excellence as it has a been a demonstration of international unity during a time of crisis.It has also reminded the world of the quiet resilience of the people of Japan.

In China, the Communist Party of China (CPC) celebrated its 100-year anniversary, sparking commentary from around the world on what it has achieved on the build up to its centenary, and what transformations and challenges it may face in the future.

Given the ongoing Olympics, this month’s edition of Tomorrow Matters opens with a piece on the history of the event, illuminating the geopolitically charged nature of its past. Then, we move to Hong Kong, with an alternative and uncompromising view of the recent closure of the Hong Kong newspaper, Apple Daily.

Two pieces follow on geopolitics: the first, a rare look at the relationship between China and Afghanistan, with a detailed analysis of the future of diplomacy between the two countries. Second a commentary on the G7’s proposed 15% global tax minimum and how it might impact the countries of ASEAN.

Finally, this month’s edition closes with a commentary on those worse affected by the pandemic in Malaysia – a good reminder that while some nations open up and resume normalcy, many countries are still fighting for the safety of their populations.

We hope you enjoy this month’s selection.

As nations around the world send their most talented athletes to compete, Adrija Roychowdhury – writing for The Indian Express – reminds us that the Olympics has had a colourful history, ranging from the introduction of the ‘torch relay’ by Nazi Germany to the US boycott of the 1980 Moscow Games

Roychowdhury also touches on the colonial duality of the event, quoting sociologist Gyozo Molnar, who believes “The whole Olympics Games are colonial propaganda. It mostly features Western sport and is predominantly still run by Western people (mostly men)”, while also identifying that the Olympics has been a rare platform for public protest against colonialism, racism, and sexism

Readers may recall the controversy surrounding the recent closure of a Hong Kong newspaper called Apple Daily. Media coverage of the closure recounted the affair as the tragic and forced loss of a strong pro-democracy outlet, with the arrest of its founder, Jimmy Lai.

Nury Vittachi pens a no-holds-barred piece for Friday, claiming an alternate view: that Apple Daily was in fact a sub-par journalism outfit, with a lack of respect and quality, including political motivations that crossed lines.

Vittachi describes how Apple Daily “commission[ed] a fake report “revealing” that Joe Biden’s son Hunter Biden had secret dealings with China… [this was] deliberate deception of the public - the journalist credited with writing the dossier didn't exist, but was a fake name with a computer-generated face.” This is an entertaining read for those interested in a different viewpoint

Standish presents a fair discussion of the motivations of both parties, pointing to the China’s desire to keep stability and security in the region (and within its own borders) as the number one reason for recent discussions. Given the West’s geopolitical failings in the region, Standish describes Beijing as the next power to open a diplomatic conversation between Kabul and the Taliban, “dangling future investment and deeper efforts to integrate Afghanistan into its Belt and Road Initiative as a way to bring both sides to the negotiating table.”

The G7 has set a global minimum for corporate tax at 15%, and while it is potentially years off of being implemented, discussions have already begun around the impacts and equity of the proposed threshold.

For South China Morning Post, Frank Tang centres the conversation on ASEAN, arguing that while many developed countries may benefit from the higher tax rate as a means to redistribute wealth post-pandemic, the blanket approach will leave ASEAN countries exposed, given their role as outsourcing locations for major Western businesses.

Tang also points to the geopolitical ramifications, suggesting that “the plan may push certain members to forge closer economic ties with China to consolidate their positions in the global economic landscape.”

Although many countries in Southeast Asia demonstrated high levels of resilience at the early stages of the pandemic, a year of challenges has taken its toll. Unfortunately, Malaysia is one of these countries, and is currently suffering from its highest infection rates.

Neryssa Azlan, writing for ABC News, describes how Malaysians who have been badly affected are leaving ‘white flags’ outside their houses as a call for help, meaning they require food, medicine, and other basic necessities.

Azlan also touches on the political state of Malaysia, specifically how the white flag movement ha is being used as a platform for Malaysians who have had long-simmering negative views of the government, transforming it into the ‘black flag movement’: “Black Flag supporters are calling for the resignation of Prime Minister Muhyiddin Yassin” she writes, “who came to power unelected.”