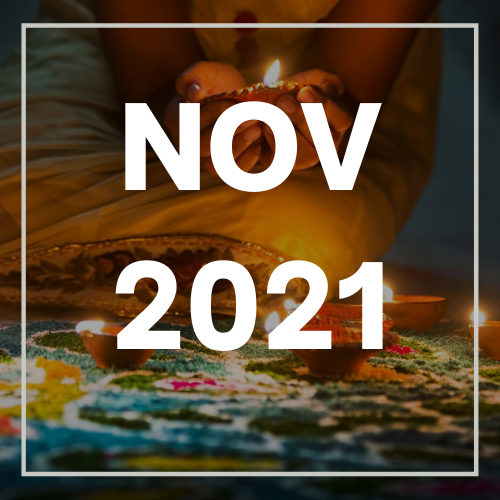 First of all, happy Deepavali/Diwali to all our readers. Deepavali, or the "Festival of Lights", is a 5-day celebration carried out by at least 1 billion people globally, to commemorate a series of events in one of the oldest epics in the world: the Ramayana.

Yet the month of October was perhaps most marked by another event at its close: the kick-off of the UN Climate Change Conference (COP26). This gathering of world leaders in pursuit of a new climate paradigm is being heavily covered in global media, and so this month's edition of Tomorrow Matters provides a platform for alternative voices on the climate change challenge, given the fact that many in Asia and Africa are now commenting on the inadequacies of current climate solutions and their inherent inequalities.

This edition of Tomorrow Matters opens with articles from the world's most populated countries: India and China. The piece from the former argues that India is not in a position to manage the carbon excesses of richer countries, while the commentary from the latter points out the "climate blame game", in which China is frequently the loser.

Then, we shift gear to a regional article, which assesses Asia's need for a stronger international diplomatic voice. Although seemingly dissimilar to climate change, the two issues are in fact related.

The penultimate piece gives a description of the "world's most successful democratic leader": Indonesia's President Joko Widodo. While the need is clear for a stronger Asian voice in climate change and diplomacy, President Jokowi proves that there is a wealth of potential.

Lastly, we conclude with local reporting, which analyses flooding in Sabah (East Malaysia), to remind us that behind the lofty concepts inherent in climate change and international leadership, there are serious impacts to communities rooted in the realities of local contexts.

India has historically taken a cautious approach to declaring climate goals (that is, until Prime Minister Modi announced the aim of net zero carbon emissions by 2070) given its slowly climbing development levels, mixed quality of life, and massive population.

While many climate advocates exclaim the need for India to take a firm stance on its carbon emissions, Minhaz Merchant, writing for Firstpost, places India within the history of climate change to identify that "India, the target of the rich world to cut its carbon emissions, has emitted 48 billion tonnes of CO2 since 1751 - just 3 percent of the cumulative global total."

Merchant's argument speaks to the political aspects of climate change, namely how climate justice may involve shifting responsibility away from countries less able - or accountable - to respond to climate change, and onto those with historical emissions to manage.

China is the world's largest emitter of carbon, and it is widely portrayed as such. However, as Nury Vittachi points out in this article for Friday, the moniker of being the world's worst polluter may be overly simplistic; in fact, according to Vittachi, it might also be racist.

He quotes Extinction Rebellion, "a UK group known for their "guerilla" style protests, [which] bluntly called on the west to move away from its Sinophobia. The identification of China as the world's leading emitter was not just misleading but racist."

Vittachi's article identifies how racial prejudice extends to geopolitical and global environmental issues, such as climate change (COP26, for example, has been called out for being dominated by white Westerners). He highlights how the nation's per capita CO2 emissions are well below much of the developed world.

Related to India and China's political relationship to the climate change challenge is the issue of the 'Asian voice' - or lack thereof - on the international stage.

Parag Khanna, writing for the Asian Research Institute, believes that "Asia requires its own version of the prevalent Western paradigm known as 'Democratic Peace Theory.'" In particular, he uses the ongoing disputes in the South China Sea as an example of how an Asian model of diplomacy could work, and emphasises the need for Asian nations to move beyond "frozen" disputes if regional stability is to be achieved - especially against the backdrop of increasing US-China tensions.

Indonesia is one of the most diverse countries on the planet, with at least 1.3 thousand different ethnic groups. It also comprises over 17 thousand islands. As you can imagine, this makes it an exceedingly difficult country to govern democratically.

Yet President Joko Widodo, popularly known as Jokowi, has managed to galvanise the country behind a pillar of Indonesian national ideology, Pancasila, meaning unity in diversity. Kishore Mahbubani, writing for Project Syndicate, discusses Jokowi's successes as a democratic leader and remarks that his achievements are hardly recognised around the world.

Mahbubani's views are firm, concluding that "Jokowi has done far more than govern competently. He has set new standards of governance that should be the envy of other large democracies."

Malaysia is blessed with tropical rainfall that makes water supply a management issue, not a scarcity challenge. Yet sometimes the nation can face severe flooding events, as occurred in Sabah - a state in East Malaysia - on 12 October.

Ashley Yeong, writing for Southeast Asia Globe, provides an immersive account of the event and its implications through interviews with those affected. Yeong quotes former state senator, Adrian Lasimbang: "Even the [people living in the village] can notice over the years how the climate and the environment has really degraded over time."

Sabah's case may remind readers that COP26 in Glasgow, while extremely important for the fate of the climate challenge, is very far away from the people who are beginning to suffer from climate change's burgeoning impacts.