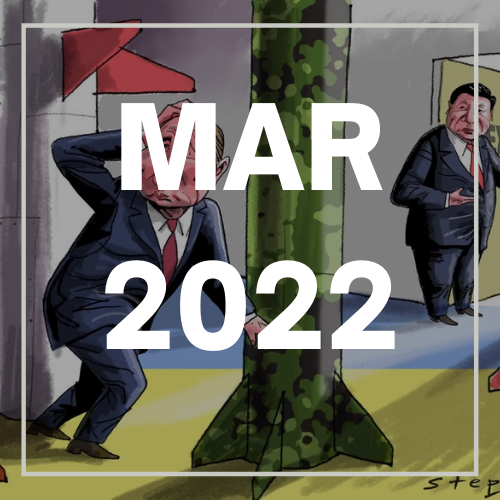 Over the last month, global media outlets have been inundated by reporting on the Russia-Ukraine crisis. It has propagated a myriad of discussions, including speculation on the price of oil and gas, Europe’s future energy portfolio, a resurgence of the Cold War, to the deepening gulf between the West and the Rest, the inherent racism of reporting on the crisis, America’s USD$13.6-billion-dollar aid package, and even adjacent topics such as the impact of the crisis on ESG initiatives.

This month’s edition of Tomorrow Matters looks at the two sides of ‘unity’. We open with a piece about China that explores how Chinese political philosophies are increasingly united by the concept of “democracy with Chinese values”. We then move to India, where the nation is heading into its 75th year of independence, and is united through national pride, but also colonial history. Next, a piece about the diplomatic process of unifying Muslim-Malay separatists in the south of Thailand. Then, a piece from Cambodia looks at the unification of new technologies with agricultural techniques. A cultural article from Malaysia and Singapore is last, examining the optimism and careful caution of Chinese families as they unite for the Lunar New Year.

With so many conversations around the unfolding situation in Ukraine, this month’s edition of Tomorrow Matters has been curated to reflect non-mainstream views which provide sharp and relevant insights.

The first piece of this month’s selection looks at the prospect of peace between Russia and Ukraine, and why China might be the mediator to find a solution. Then, we move to Malaysia, with a considered view of the broader currents surrounding the crisis, and why ASEAN could benefit from keeping itself disentangled. A 2020 article from Singapore follows, as a reminder of ASEAN’s balancing act between China and the US. The penultimate piece is from Pakistan, and connects-the-dots between the global realignment currently taking place with Pakistan’s civil society ecosystem. Finally, we wrap up with a cultural piece from Indonesia that looks at the importance of naming traditions in the country, including how they relate to national identity and how they have been influenced across time.

Ukraine invasion: China may be world’s best bet for brokering peace between Russia and the West

The escalation of the situation in Ukraine has occurred over an extraordinarily rapid period. Russia has increased its shelling and has cracked down on its own population. Meanwhile Western countries (particularly America and the UK) have retaliated by withdrawing Russian banks from SWIFT, slapping sanctions on, and cutting business ties.

Given these events, it is clear that a ceasefire is unlikely. This is why France and Germany have already arranged to speak with China: to invite the nation (which typically follows a policy of non-interference), to help sue for peace. In a poignant article for South China Morning Post, Tom Plate examines why Western diplomacy is not working, and why China should step up. He is not the only one to have suggested such a role for China.

Plate is clear with his message: “The road to nuclear doomsday must be blocked. Western diplomatic thinking must expand, not tighten up, configuring a smart way to offer Putin, sane or not, a corridor to serious negotiation and peaceful settlement.”

Writing for Focus Malaysia, R Paneir Selvam gives a concise description of key events surrounding the Russia-Ukraine crisis. He reads the tea leaves to suggest that the bigger play concerns the US-China rivalry – the US driving a wedge between Russia and China, without resorting to military conflict itself.

He ends the piece by encouraging ASEAN to distance itself from entanglements stemming from NATO or Western actors: “Malaysia can play a crucial role by reactivating the declaration of the Zone of Peace, Freedom, and Neutrality (ZOPFAN) and encouraging Non-Aligned Movement (NAM) members to declare this region a war-free zone."

Asia, say no to NATO: The Pacific has no need of the destructive militaristic culture of the Atlantic alliance

When US President Joe Biden assumed office in 2020, he had significant ground to cover, including in Southeast Asia: political ties had stagnated under former President Donald Trump. So what should ASEAN’s approach be, given it is placed squarely between the US and China?

In this piece from 2020, Kishore Mahbubani discusses the importance of ASEAN’s balancing act between the superpowers, explaining that stating that “ASEAN’s leaders sympathize with Chinese President Xi Jinping’s statement that every country has a right to choose its own path of development, because this is being practiced in ASEAN itself.”

In the face of the Russia-Ukraine conflict, and the wider ideological battle it represents, Mahbubani’s points are more relevant than ever.

Pakistan’s Prime Minister, Imran Khan, visited Russia on February 23, the day before the Russia-Ukraine conflict began. This is part of a move to improve ties between the two nations. And when asked by 22 Islamabad-based diplomats (mainly European), to condemn Russia as part of a United Nations resolution, Khan’s response was "What do you think of us? Are we your slaves ... that whatever you say, we will do?"

To Umair Javed, this strength of Khan’s voice is part of a broader realignment that could be a healthy transformation for Pakistan. In an insightful piece for Dawn, he connects the events in Ukraine to Pakistan’s positioning on the global stage, and draws the link to what the ramifications are for civil society groups during a time of such upheaval.

“Groups and causes that are seen to be aligned with out-of-favour actors can lose credibility or face coercion,” Javed writes, “Under this fresh wave of global realignment, this is a key challenge facing civil society actors in Pakistan.”

1955 was a turning point for Indonesia: the significant Chinese diaspora were required by law to select either Chinese or Indonesian citizenship. Most chose the latter, and thus began a top-down process to assimilate the Chinese community, including the banning of Chinese names and the public speaking of Mandarin.

For South China Morning Post, Johannes Nugroho tracks the evolution of Indonesian identity through naming traditions that have been influenced by China, Islam, America, Britain, and the Dutch. He provides a succinct historical analysis, for example writing that “exposure to American culture from the 1970s onwards saw many Javanese adopt surnames for the first time. American-ised nicknames also became popular, such as in the case of Indonesian tycoon widely known as Bob Sadino, whose real name was Bambang Mustari Sadino.”