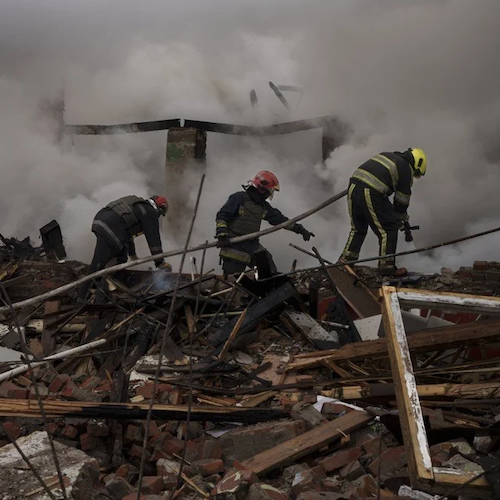 Russia-Ukraine war: Europe failed by not building alliances with Asia Firefighters work to extinguish a fire at a destroyed culinary school in Kharkiv, Ukraine, earlier this month following a Russian attack. Photo: AP

Lost in the fog of war is the truth that the Russia-Ukraine crisis has revealed the failings of Europe’s leaders on two fronts.

First, why did they not see this coming? Because they are in denial about the nature of their subservient relationship with an increasingly reckless and hegemonic United States.

Second, why do they maintain this relationship with America? Because they lack the spine to embrace the alternative: an independent foreign policy on a more equal standing with the rest of the world – especially with Asian powers such as China and India. 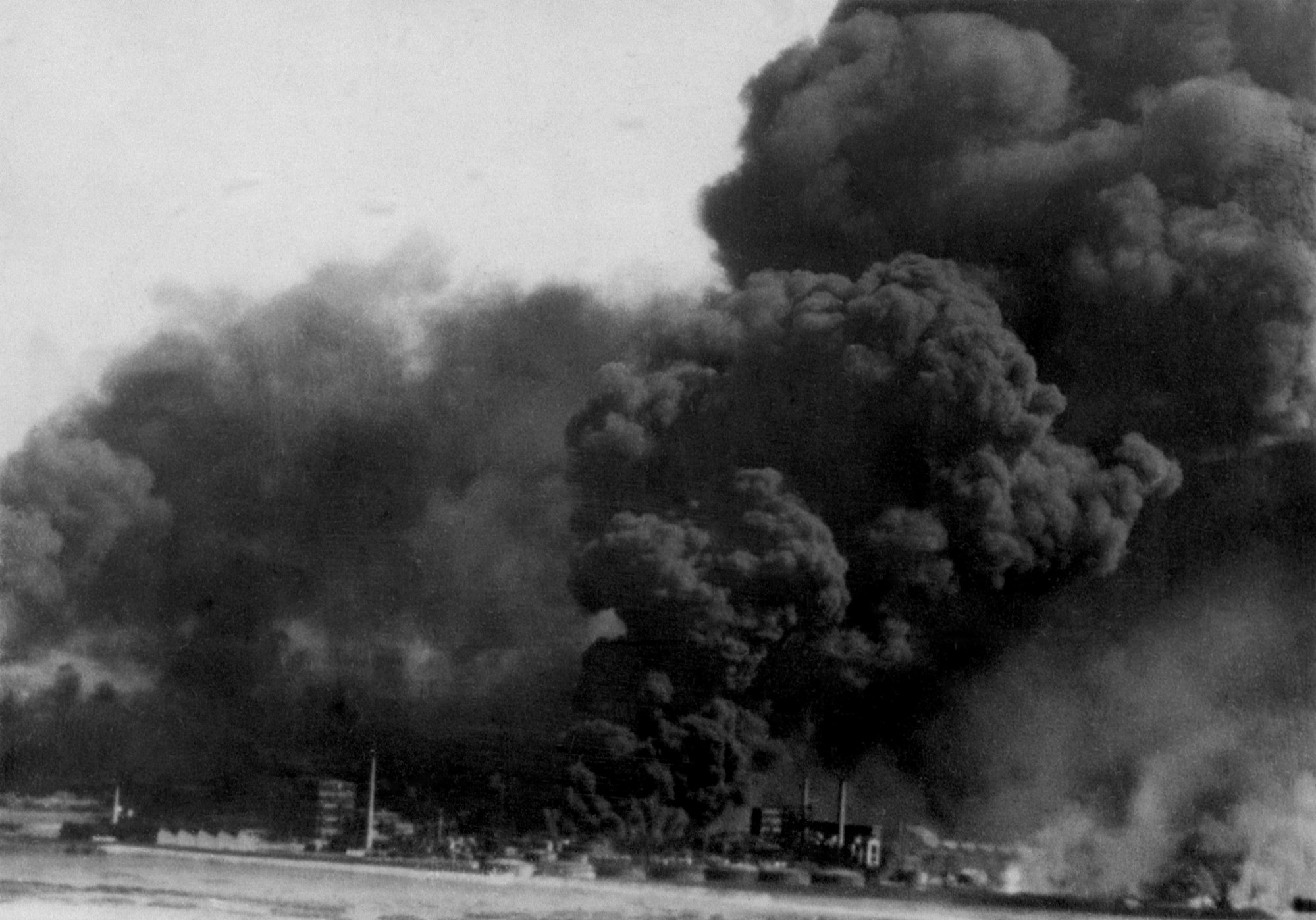 If Europe, with its history of triggering global wars, is to move towards peace once more then it must first face up to these leadership failings and chart a new course based on something more than narrow alliances rooted in a shared European heritage and race.

Wars must be avoided at all cost and it takes true leadership to maintain peace, not ideological posturing and pandering to special relationships. Countries always act in their self-interest – the protection of national security, for example – but in this instance the leaders of Europe failed to protect their citizens by imposing a national security threat upon Russia.

This is not a defence of Vladimir Putin. Instigating war and its horrors is unforgivable, and he must be held responsible for his actions. But we should not be blindsided: it is a geopolitical reality that any country would feel its national security was at risk when faced with a military coalition, which it cannot join, expanding towards its borders. This type of provocation is intolerable and Western leaders should not have expected it to be endured.

Yet many in the West still arrogantly believe all other nations must mirror their ideologies and are deserving of antagonism if they do not. This stance is naively insufficient for a multipolar, globalised world that is sadly also overmilitarised – something Europe should have already recognised.

If China, India or Venezuela began a process similar to Nato’s expansion with their neighbouring countries, it would cause geopolitical uproar – the mere presence of Chinese ships at the edges of the South China Sea triggers anti-China sentiment from the West.

War is avoided through diplomacy, communication, and an acute understanding of the fears and concerns of others. Leaders in Asia understand this, for the most part, given the wars the region has endured – many of which have their roots in the colonial era – and as such, they invariably push for peace and not military escalation. Witness Southeast Asia, which since the end of the Vietnam war – fought to liberate the country from centuries of foreign domination – has not seen a major conflict. Despite the presence of foreign military powers like the US, the region has maintained a non-aligned foreign policy and tried not to take sides.

America’s determination to dominate Asia militarily has typically been justified by a carefully crafted and crafty narrative that Asian nations are apparently incapable of building and enjoying peace without the military presence of the most warlike nation on the planet.

Europe’s leaders have gone to great lengths to conceal their lack of leadership by transforming Putin into a pariah and even calling for regime change, instead of pursuing a diplomatic approach. In doing so, they and the international commentators that echo them abdicate responsibility for not pre-empting the war; they can instead lay the blame entirely at Putin’s door and paint him as a movie-style villain. So it was with Saddam Hussein, Muammar Gaddafi, and anyone else seen as unsavoury by the West. The same treatment is now being meted out to Chinese President Xi Jinping. But diplomacy means forging friendships, even with enemies, to avoid catastrophic outcomes. This simple logic and calculus was cast aside as Europe outsourced its security to the US and Nato.

Which leads us to the first front: European leaders were helpless to prevent this war from occurring because of their coveted close relationship with America. 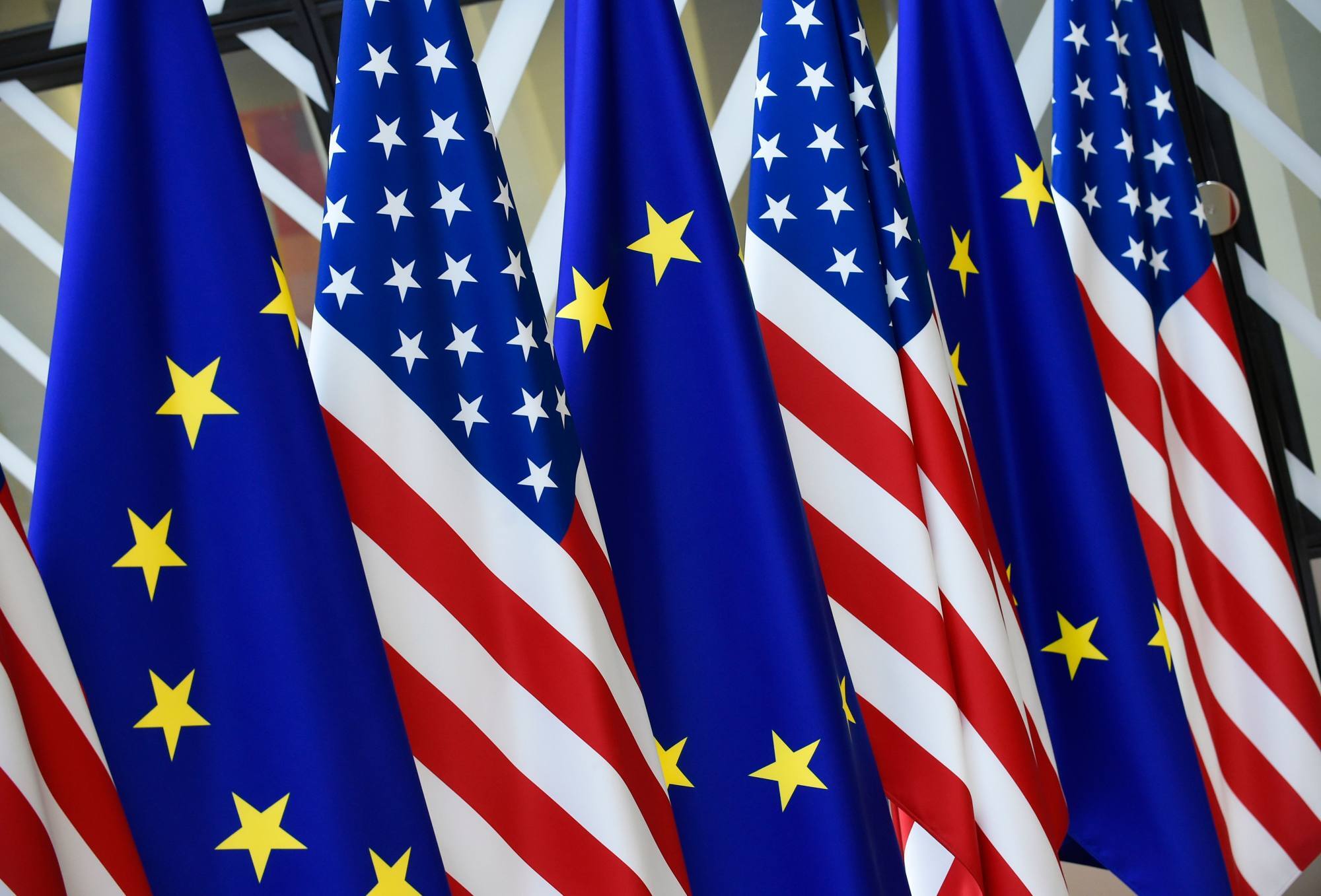 US and European Union flags are seen in Brussels. Europe has desperately tried to maintain a ‘special’ relationship with America. Photo: AFP

This relationship is ultimately predicated on a shared European heritage and the post-war ideological unification of the US and Europe as leaders of the “free world”, which the rest of the world now largely sees as an outdated coalition of Caucasian nations spearheaded by the Anglosphere. Europe – Britain especially – has desperately tried to maintain this “special” relationship with big brother America in recent decades, leading many European leaders to outsource decision-making to Washington on issues of geopolitical importance, from interventions in the Middle East to trade agreements, economic restructuring, and sanctions. This in turn further emboldened the US and encouraged its belligerence.

It has also prevented Europe’s leaders from creating an independent strategic foreign policy approach that places them in control of their own regional security. A key tenet of this strategy should have been cultivating ties with Russia and China 20 years ago to build world peace. Instead, the Europeans chose to tether themselves to an insecure America and allow themselves to be drawn into an ideological partnership of global dominance and supremacy, based on Cold War mindsets – a position that is singularly unsuited to guarding Europe’s self-interest and its critically important role in the emerging post-Western world.

Europe saw China simply as a trading partner and a threat, rather than an ally. More often than not, it chose to follow the prescriptions of the US – a country that has been at war for much of its existence, and that allows domestic politics to become the catalyst for militaristic intervention in other parts of the world.

Rather than working with Russia to prioritise peace, European leaders drank deeply from US doctrine and ultimately capitulated to it. Now, Europe is caught in a bind: looking to American foreign policy as its North Star when this was what got it into this unnecessary war in the first place. After all, the US is unlikely to come to Europe’s aid if the conflict worsens – funding and weapons are one thing, but ground, naval, and air support against another nuclear power is not on America’s agenda. And there is no reason to expect a domestically insecure Joe Biden will sue for peace when he is desperate to strengthen his position with the American public by showing how tough and righteous he is. If that means war in Europe against one of America’s detractors, so be it.

The business of war

European leaders should have been acutely aware that the US has the largest military-industrial complex in the world. Since 9/11, one-third to one-half of the Pentagon’s US$14 trillion in spending has gone to for-profit defence contractors, while dozens of members of Congress and their families own millions of dollars’ worth of stock in these companies. America is the most capitalist country in the world, and the arms industry is big business. But the market can only grow if conflict and military expenditure increase around the world. For European leaders to be aware of this and not act accordingly is a failure of strategic leadership. There is a lesson here for Asia, too: make military spending a large part of your national budget and economy, and ruin awaits on many fronts.

Why did the Europeans not act on this knowledge? Answering this question brings us to the second front: they do not have the backbone to stand up to Washington and sacrifice elements of their relationship with the US, which offers them a disproportionate place in the global hierarchy of nations, so they can be free of American influence in their affairs. By the same token, how much longer will Japan kowtow to a US foreign policy that is increasingly dictated by neocons and instead forge one that is independent and built with its Asian neighbours?

"It should have been clear to the Europeans since the turn of the millennium that America’s political system was beginning to become a destabilising global force."

It should have been clear to the Europeans since the turn of the millennium that America’s political system was beginning to become a destabilising global force, rather than a unifying one. Yet no European leader has taken concrete steps to limit US interventionism or create an independent foreign-policy approach. The result is that Europe now finds itself in a pseudo-proxy war with Russia – a conflict that is right on its doorstep, not in some faraway place in the Middle East or Asia.

Where is the European leader willing to call this out with one simple statement? And better yet, follow it up with diplomatic action? What is the principle that European leaders think they are defending when negotiations break down and lives continue to be lost?

Europe’s lack of leadership was not much talked about before the crisis. But just as war has united the West in its desperation to maintain the anachronistic “struggle of light over dark” (an actual quote from The Economist to describe the conflict) that so defines its moral posturing, so has it given voice to those observers and commentators seeking to bring periphery conversations to the surface. European leaders should heed such opinions, even if they are a departure from the actions of their forebears.

Europe should come to terms with the end of empire, and centuries of privilege, and reach out to Asian powers that are going to shape the course of the 21st century. That means making allies of China, India, and Indonesia – total population 3 billion – rather than condescendingly viewing them as former colonies not worthy of a “special” relationship. They may not share a common European heritage, but do such archaic and even racist ideas still matter in the 21st century?

Europe needs to come to terms with the harsh reality that America is not on its side, because what drives the US geopolitically is ultimately domestic gain – both bolstering its position as global hegemon and retaining its economic privileges, such as its dollar as the world’s reserve currency. Asian leaders, meanwhile, need to understand that despite the significant build-up of US military power in the region over the last half-century, it is not in their best interests to allow “Nato-isation” to occur. Asia needs to work collectively to curb US military expansion and make sure Washington understands that the region is not made up of client states, and is in fact capable of maintaining peace without outsourcing its security like the Europeans.

After spouting righteous rhetoric against Russia and Putin, European leaders are finding themselves face-to-face with militaristic escalation that they are not equipped to deal with. This is not a war that generals marched into; it is a war that politicians lacking strategic leadership skills allowed to happen. Across Asia, political leaders need to be aware of this all important lesson.