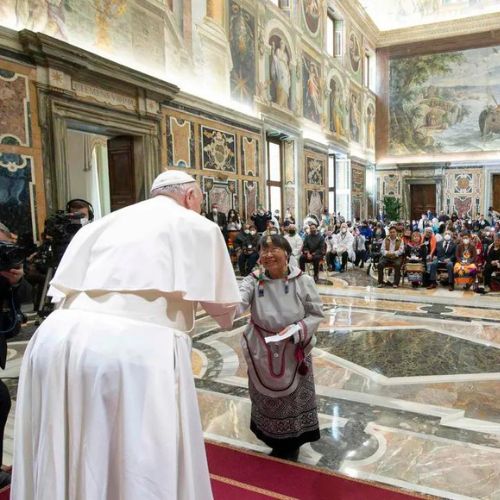 The visit of the Pope to Canada later this month has stirred an often nasty and unhealthy debate. But it has also reopened the wider discussion over Canada’s role in the global system of white privilege.

Pope Francis’s visit builds on the recognition of the harm done by the church to Indigenous communities; the same old soul-searching for a few weeks before a likely return to business as usual seems likely. This time with a nice new topping of claimed liberal consciousness about the settler community’s dark past.

This now seems to be the fashionable trend. The King of Belgium went to the Democratic Republic of Congo few weeks ago. He returned a mask stolen from the people of that nation during Belgium’s murderous reign — which one his own family helped perpetrate.

This was extensively covered and widely seen in the liberal Western media as a positive step forward. Yet there was no real apology, let alone a full review or accounting of what happened: generations of brutality and exploitation — even attempted genocide. Nor any discussion on how to repair the wide generational damage done. There have been for many years a wide array of proposed new paths forward.

So, when the Pope arrives in Canada and performs the niceties of reminding Canadians of their shameful past — in the name of Jesus Christ — let us hope that it does not stop there. If Canadians are as serious about equality and are as pious as the Pope apparently believes, then there are many changes they can help deliver.

The first — and most important — is to recognize that for all of Canada’s efforts at pursuing racial equality, the nation still remains part of an active global system of white privilege; one that empowers white Western nations to wield economic dominance, geopolitical control, and cultural influence around the world. If Canada really wants to pursue its decolonizing project, it has to take this wider reality into account, or achieving equity within the country will never succeed.

Consider education, business, and politics as some key examples. There is low-hanging fruit in each areas. Indigenous people must have greater, genuine access to higher education, using proven tools like affirmative action. Making real gains on diversity and inclusion in business is still too slow and remains essential to ensure equal access to opportunity, but today that must include demonstrated access to roles at senior executive levels too.

Indigenous leaders in federal and provincial cabinets and on major city councils would be another proof of serious commitment. These transformations should be a baseline for a visibly more effective challenge to white privilege.

"Tackling exclusion and privilege at home means seeing Canada’s place in the global structure of white privilege and joining hands with those in the struggle against that much wider and deeper system of suppression."

However, these are long-standing policy objectives, however poorly executed. Today, to genuinely pursue equity, we need to examine the underlying assumptions in these systems.

In education, curriculums are still largely European narratives, approaches to knowledge and perspectives on the world. Canadian universities are not exceptions to this — embarrassing, as they recruit an increasingly non-white student body from around the world.

The largest Canadian business organizations are white-owned, led by white executive teams, and are well-integrated into the global command structure of multinational business: the West’s white financial gatekeepers, banks and rating agencies; as well as the global oligopoly of auditors and management consultants.

In geopolitics, Canada remains part of the Anglosphere that exerts disproportionate global influence: including the anachronistic Five Eyes security alliance, whose members represent less than 10 per cent of the world’s population. Canada’s membership in the G7 is not based on its size or economic leadership but its membership in the club of privilege — Canada has a population the size of Malaysia.

Finally, holding a global perspective on white privilege and Canada’s role in it, is important for Indigenous peoples. Tackling exclusion and privilege at home means seeing Canada’s place in the global structure of white privilege and joining hands with those in the struggle against that much wider and deeper system of suppression.

It will take generations to make these systemic changes, but that is the essential work to be done if Canadians are serious about decolonization and making a commitment to equality in their respect for human rights. And, perhaps, a good message to deliver to the Pope.