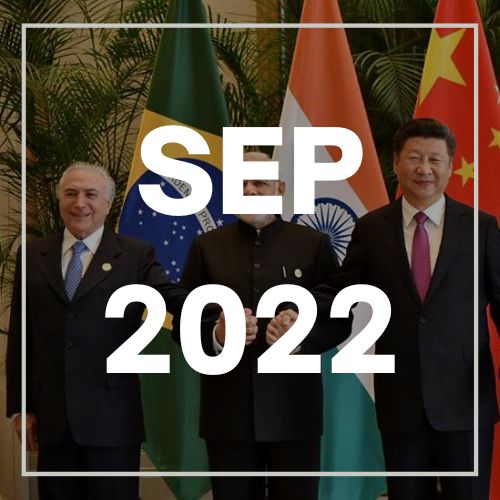 This month’s edition of Tomorrow Matters places emphasis on the topic of world order, with an opening article by GIFT’s CEO, Chandran Nair. Upon invitation by Institut Montaigne, one of France’s leading geopolitical think tanks, this article explores the wider implications of the Russia-Ukraine war on world order. Three articles from different authors are included that give other perspectives on the shifting world order.

The next article discusses what the passing of Queen Elizabeth II means to India, through the lens of the country’s colonial past.

Then, we move across the border to Pakistan, with an article that gives details on the recent severe flooding against the backdrop of climate change.

The final article posits the need for more constructive bilateral dialogue between China and Taiwan given Nancy Pelosi’s recent visit.

The Emerging World Order is Post-Western and Pre-Plural

During the early stages of the Russia-Ukraine war, the concept of the “struggle for world order” was evoked, pitting the West against certain non-Western nations, mainly Russia and China. But this bipolar view of the world is limiting, argues Chandran Nair, especially given that the world will inevitably reach a post-Western state. What does this look like, and what should Western and non-Western countries do in the face of such a transition?

“For many Western nations, the concept of the post-Western/pre-plural world evokes images of a world divided. But to non-Western countries, it is not something to be feared nor fought. To them, it presents a rare opportunity for global unity. The world will continue to advance, and the West should recognize that the new world order will be one of de-Westernization, not of de-globalization or regression”

Other articles on the topic of world order are provided below.

U.S.-China fight to lead planet earth will be decided “within 15 years”

"The millennia when China was the world’s greatest power saw a laissez faire international order in which the East Asian state demonstrated little ambition for global empire or the imposition of its ideology, way of life, religion or method of governance abroad in stark contrast to the Western-led order which succeeded it.”

How to fight for democracy – at home

“Non-Western countries may not want to emulate China’s political system, but many do share its belief that the claim of universal values is just a convenient justification to promote Western values and interests, and to legitimise Western interference – often at the barrel of a gun – in the domestic affairs of others, and sometimes, to effect regime change or foment revolutions.”

The Clash Of Two Gilded Ages

“Ultimately, the contest between the U.S. and China is not about who will sabotage and outrun the other. The greatest crises facing each country are self-inflicted... Their shared challenge is reshaping and managing capitalism. If there is a race, whichever nation “wins” is the one who avoids self-inflicted wounds and makes capitalism work for the common good rather than for a small sliver of super-elites.”

From Kingsway to Kartavya Path: India comes of age

The passing of Queen Elizabeth II has been described as the end of an era by many. But for India, it may signal the turning of a new page in the country’s history.

In this article for South Asia Monitor, Amb Bhaswati Mukherjee shares her outlook on the dawn of India’s new age from a historical perspective – a new India that embraces the heritage, cultures and new symbols of nationalism in a way that moves beyond its colonial past.

“Resurgent and dynamic,” Mukherjee writes, “a young nation, old in history and culture is finally coming to terms with the painful legacy of slavery, colonialism and the pain of partition.”

Pakistan has recently experienced severe floods, resulting in 1500 casualties. The nation has the highest number of glaciers outside of the polar regions in the world, which therefore make it vulnerable to the impacts of increasing global temperatures.

In this piece for The Diplomat, Seth Borenstain and Sibi Arasu provides detail on the triggers of the floods. Despite contributing relatively little to the world’s climate problem in terms of per capita CO2 production, they believe that Pakistan has entered a state of extreme climate risk due to their geographical location: “The disaster is hitting a poor country that has contributed relatively little to the world’s climate problem, scientists and officials said. Since 1959, Pakistan has emitted about 0.4% of heat-trapping carbon dioxide”

Why Taiwan Needs to Start a Dialogue with China

Following China’s unannounced military drills, Taiwan prepares for war as tension with China becomes heightened. Nancy Pelosi’s venture to Taiwan has led to heightened tensions between China and Taiwan, which has prompted discussion around the possibility of conflict between the nations. Much of this discussion is framed around how Taiwan can mitigate escalation and conflict, but does not explore how Taiwan can improve relations with China. in the interest of Taiwanese citizens, war should be avoided, especially when it cannot rely exclusively on the United States to communicate with China on its behalf.

In Ray Weichieh Wang’s article for The National Interest, the author shares that the Taiwan-China dialogue could avert a potential conflict brought on by unilateral miscalculations, help the two sides deepen their perceptions on various topics and enhance mutual understanding, and lastly, put Taiwan in a more proactive position to respond to the developments in U.S.-China relations.

According to Ray, “Most confabulation in Taiwan and beyond pivots on how Taiwan can better prepare itself for an upcoming war against China, neglecting Taiwan’s potential to palliate the tension and avoid conflict through engagement with China.”