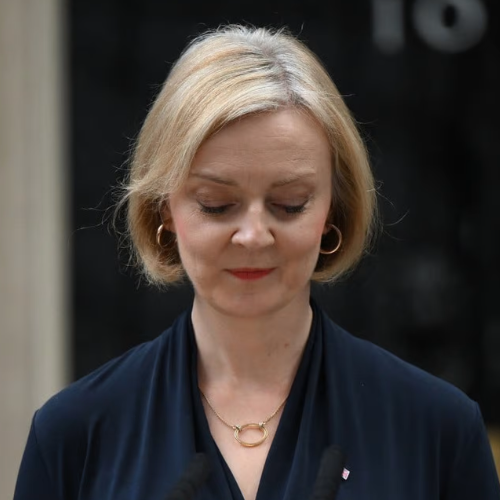 Truss’ brief tenure has shattered illusion of democracy as be-all and end-all of approaches to governing societies and serving citizens’ needs. West’s extrapolation of history of failed 20th-century dictators into 21st century is damaging to forging bilateral relations with countries like China.

Liz Truss’ catastrophically brief tenure as Britain’s prime minister – the fourth leader in six years of the world’s sixth-largest economy – has shattered the illusion that democracy is the be-all and end-all of approaches to governing societies and serving the needs of a citizenry.

Of the last four to assume the position, three – Theresa May, Truss and now Rishi Sunak – were not elected by the people, but instead by a minority cabal of elites, driven by vested interests.

The ideological and misguided decisions Truss made to serve the elite rather than the public triggered a domestic financial crisis affecting ordinary citizens who had no say in her appointment. It provoked a damning international reaction which further plunged the British economy into a meltdown.

Sunak, like Truss, was chosen by a narrow clique of Conservative Party members – representing just 0.26 per cent of the population. All eyes are on how he performs.

"The reminder here is that democracy does not ensure meritocracy. Individuals who are inept, opportunistic and driven by a thirst for power can be put in charge and take a nation down a reckless path."

The reminder here is that democracy does not ensure meritocracy. Individuals who are inept, opportunistic and driven by a thirst for power can be put in charge and take a nation down a reckless path. During Truss’ six-week term, she ramped up anti-China rhetoric, coming close to officially designating the state a threat to Britain – a puzzling action since the UK economy is in desperate need of partners after Brexit.

The results of Israel’s elections – fifth in four years – show how extremists have more power than ever. Israel claims to be the only democracy in the Middle East, but millions of Palestinians in occupied territory cannot vote, allowing Israelis to pick leaders who continue to perpetuate the oppression of a minority.

These are the types of failings and shortcomings Western democracies often accuse other countries or political systems of. Boris Johnson and Donald Trump expressed disdain for non-democratic nations, yet ironically represent a disappointment of the liberal democratic system to many in their respective countries.

So the question remains: why and how has this been happening in major democracies?

The unfortunate reality is that democracies do not often function in the idealistic way their advocates paint them – do not go to war with each other, do not oppress minorities, offer the majority a say, self-correcting and allow bad leaders to be replaced.

When it comes to foreign policy, they are anything but democratic. Supposedly democratic Western nations have inflicted the worst harm on others in the last 50 to 60 years through interventions and wars.

This has created great global mistrust and led to alternative forms of political systems and approaches to governance gaining traction in recent years. It never takes too long for the Western world to conclude that such systems are inherently “amoral”, regardless of how well that government performs as measured by the social outcomes.

This is part of a deep-rooted fear of accepting that there are other approaches to governing societies well. Acceptance would challenge the primacy of the ideological basis underpinning the prevailing Western narrative on its moral superiority and its global democracy project – which seeks to ensure the West’s desire to run the world via a rules-based global order is not threatened, therefore maintaining its economic hegemony and associated privileges.

This is unfortunately a blatant act of denial: a democratic government is just one of many types of governance systems available to sovereign states. It is worth remembering the UN Charter did not mention democracy when signed in 1945 – because it is each nation’s sovereign right to pursue its own political system.

The refusal to accept plurality has led many in the West to believe there is some global march of autocracies that will put the whole of humanity at risk. But this is far from the sentiment on the ground in many countries, as citizens hanker for better governance systems, regardless of the form they take, that are competent, honest and serve the people’s needs.

What they do not need is Western nations using the fig leaf of democracy to intervene with crude instruments like sanctions and war, to further geopolitical goals linked to their economic interests.

The reality is that people around the world are being let down by so-called democracies and are therefore in pursuit of other forms of governance systems tailored to suit their unique needs and challenges. This is an indication of a deeper malaise for which more democracy is not the panacea. It points to a very inconvenient truth of many democracies today – the failure to govern fairly. The systemic political leadership problems that have beset the UK for close to a decade are a prime example.

A government’s primary role is to manage resources in a way that allows its people to lead dignified lives and to ensure the economy it oversees protects the masses. This is a critical challenge for large countries where many do not even have basic needs met. Therefore, the governance approach taken has to vary from country to country. When a government fails to fulfil its primary objectives, it calls into disrepute the approach adopted. 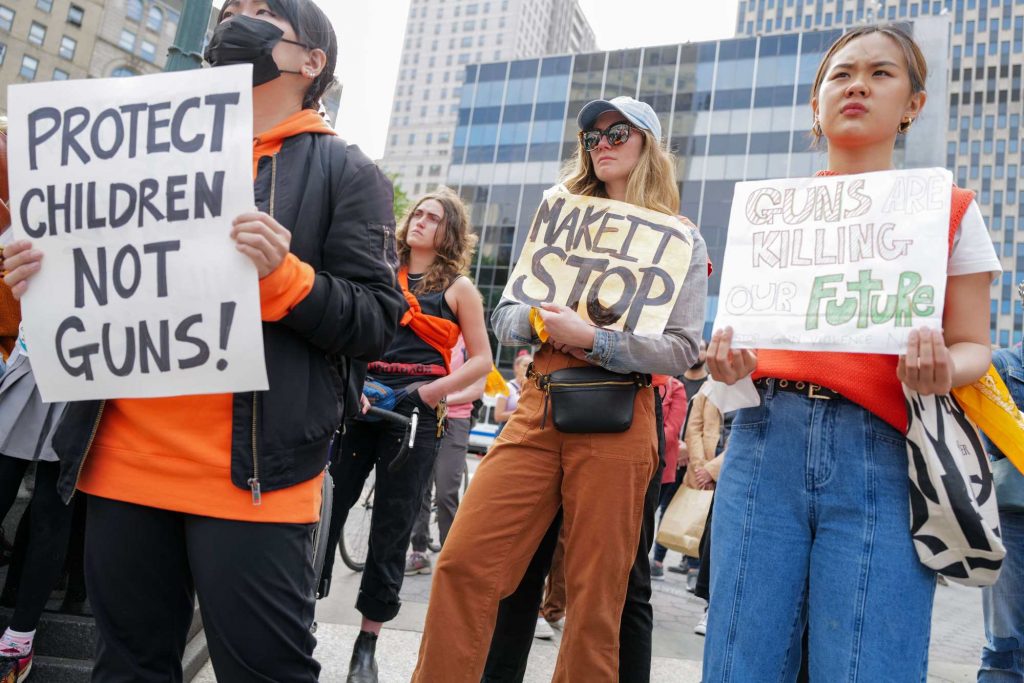 Activists during a rally to demand an end to gun violence in May 2022 in New York City.

In the United States, the government has for decades failed to provide what even its allied economic counterparts have – access to basic healthcare, gun control measures, a decent social safety net, and protection from widespread systemic racism, just to name a few. This has resulted in a deeply divided country that has seen the rise of extremist groups, growing fanaticism around ideological positions bordering on fascism, and a widening inequality gap. This is not a model other countries desire.

It culminated in the election of Trump, branded an “authoritarian” leader by observers, especially in light of the attack on the Capitol. This mischaracterises the issue as a struggle between democracy and authoritarianism.

Labelling Trump as an authoritarian tyrant or, more kindly, a populist, is an easy way to hate the player and not the game – but the truth is, the US is not a democracy as much as it is a plutocracy, and this is a cause of immense tension in the country. Former US President Donald Trump during a rally in Florence, Arizona in January 2022.

It makes little to no sense to measure the effectiveness of governance simply by ideological labels. It should rightly be measured by its objectives and outcomes.

The bitter reality is that time and time again, so-called democratic governments have used democracy to mask their failures in providing for their people whilst pursuing economic policy objectives favouring elites. This concentration of wealth and power in the hands of a few has been anything but democratic in terms of the outcomes produced.

The very governments whose own houses are in a democratic shambles assume a sanctimonious high ground when it comes to alternative systems, simplistically labelling them “authoritarian regimes". Most recently, many in the Western world reacted with glee when images of posters accusing China’s Xi Jinping of being a dictator made headlines. The sentiment then was that finally, someone was standing up to the authoritarian Xi regime.

But all of this to what end?

China’s brand of governance may leave a bitter taste in the mouths of some, but this does not negate the outcomes produced. On the socioeconomic front, Xi’s China has seen 76 million uplifted from extreme poverty, a 66 per cent increase in the disposable income of urban households, and 82 cent for rural households between 2013 and 2022.

China has also taken the lead in addressing global climate issues. The World Bank recently reported that the nation was slowly but surely transitioning to a low-carbon economy. Under Xi’s leadership, China has also included ecological well-being and its advancement into its constitution, demonstrating a long-term commitment to addressing climate change – while the US labours over short-term executive actions that can be reversed with each changing administration.

These outcomes demonstrate the effectiveness of China’s system for its own unique contexts. It is thus telling that Western media is overly concerned with Xi’s third term in office given the practice of power consolidation is not foreign to any governing system – “democracies” included.

The West has for decades extrapolated the history of failed 20th-century dictators into the 21st century as if there is a predictable continuum. This is extremely damaging to forging bilateral relations with countries like China as it precludes any respect for the Chinese system and does not take into account policies or results.

Today’s post-Western world is borne out of a celebration of self-determination after centuries of colonial domination and a deep acknowledgement of the diverse values and traditions in a plural world. To develop fresh, nuanced ways of governing societies, the simplistic interpretations of democracy must be put to a stress test for the world we live in today. A UN General Assembly meeting at the United Nations headquarters in New York City in October 2022. Societies must look critically at democracy and assess its flaws.

Societies around the world must look critically at what democracy is and assess its flaws. More importantly, they should not exclude positives from other forms of governance.

This next era of global political awakening, which is already upon us, will require societies to take the best of many variants of governance and produce forms that suit them for these turbulent times. The crises we face today are not a result of authoritarian iron rule. Rather, they are a symptom of the callous indifference of leaders, whether in democratic or non-democratic states, who then miserably fail at their responsibilities to their people.

It is a cop-out and intellectually dishonest. The global community should not fall for this self-serving righteous bluff.