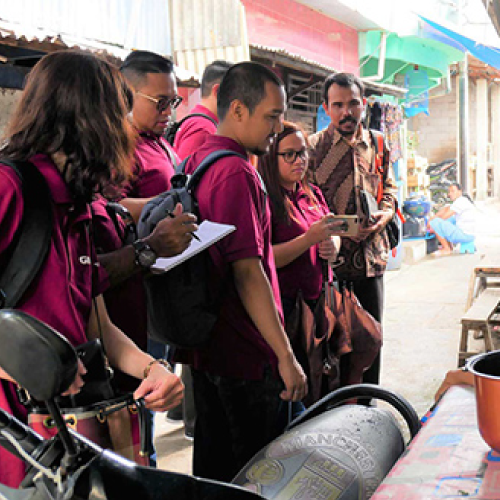 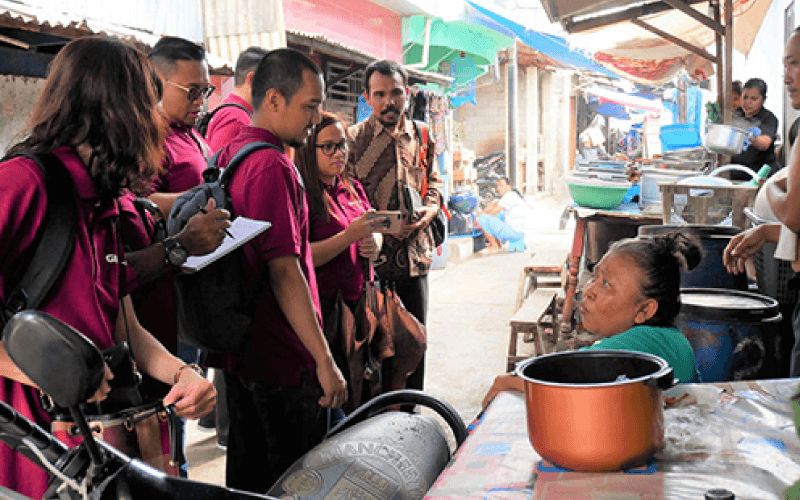 The COVID-19 pandemic is challenging long-held beliefs in economics and business that people have held for decades. As economies pause and support systems come under strain, returning to "business as usual" looks less possible by the week.

In New Models for a New World, our new series of blog posts, we return to some of our recent project outputs and the lessons they provide for today regarding economic development, sustainability and business opportunities. The COVID-19 pandemic reveals new challenges. GIFT's project outputs provide lessons on how to resolve them.

The best analogy for Indonesia’s economic prospects is perhaps its handling of the COVID-19 pandemic.

At first glance, Indonesia appears to be handling the pandemic quite well.

In the rankings of deaths per capita, Indonesia is 81st, below countries like South Korea, which received global praise for how it managed the outbreak.

Similarly, Indonesia’s economic data appears strong: it is, after all, the largest economy in Southeast Asia. Jakarta is a major contributor to this economic strength, generating 17% of Indonesia’s GDP and with an economic growth rate of over 6% (faster than Bangkok, Hong Kong or Kuala Lumpur).

But a closer analysis of the numbers paints a different story. While Indonesia’s COVID-19 fatality rate is comparatively low, Jakarta’s is not. At 48.9 deaths per million, Jakarta would be the world’s 27th worst affect country. The city’s case curve appears to be trending upwards. Commentators, such as Indonesian academic Muhammad Zulfikar Rakhmat, argue that the government is underestimating the severity of the situation, prioritising the economy over public health.

The same can be said for Indonesia and Jakarta’s economic statistics. Unemployment and informal employment are endemic in Jakarta. The city’s unemployment rate is 5.2%, almost double the rate of Manila’s. Nearly 90% of its informal workforce has only a basic level of education, causing skill shortages and mismatches: as of 2015, 52% of the city’s employed population was under-qualified for their position.

Jakarta is also struggling with income inequality and poverty. The city’s Gini coefficient is 0.39, higher than countries like India. Over a quarter of its population lives in informal dwellings, which lack basic infrastructure and access to public services. Only 57% of Jakartans have access to piped water.

Time for a Rethink: The Jakarta Terampil Model 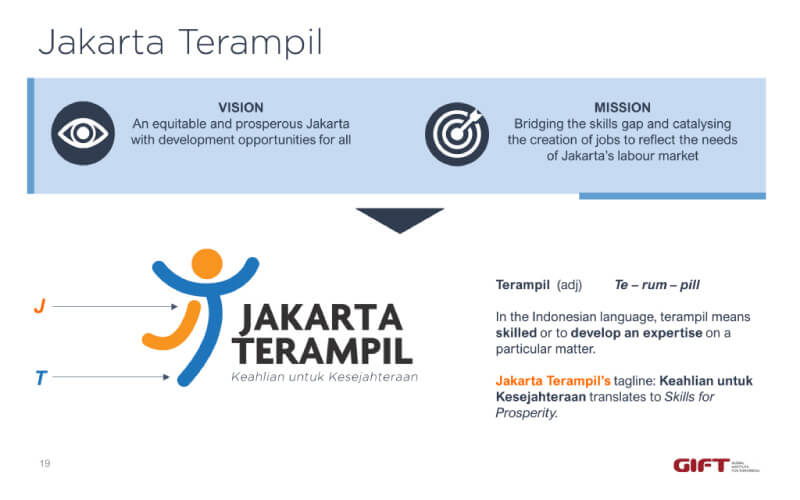 Between November 19th-30th 2018, GIFT partnered with the Municipal Government of Jakarta (DKI) to develop a model to increase levels of employment amongst Jakarta’s vulnerable populations. The result was “Jakarta Terampil” (JT), which translates to “Skilled Jakarta”. The approach would dramatically expand access to vocational skills training through a public-private partnership, backed by an endowment fund, which would create purpose-built Skills Hubs.

Jakarta’s youth unemployment rate is 16.3%, three times the overall unemployment rate. These problems will worsen as more people reach working age: Indonesia is a young country, with only 7% of the population over the age of 65. The city clearly needs a different approach that would not only make it better equipped to handle future crisis, but also administer the city in a manner that improves the livelihood of young Jakartans. 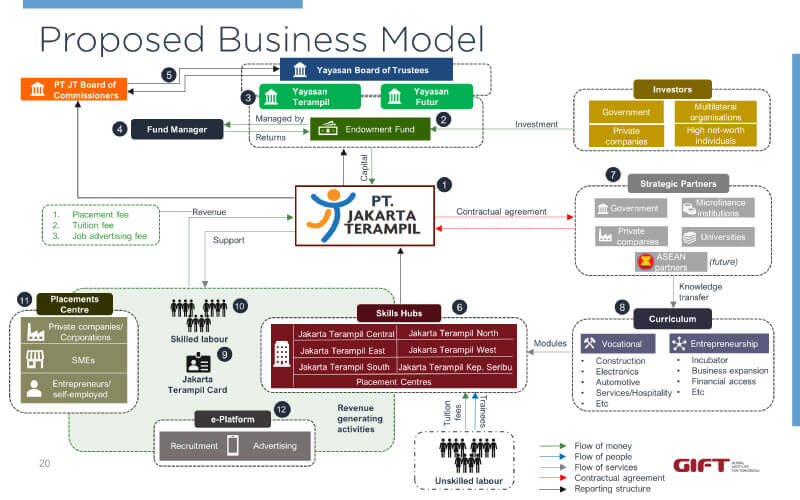 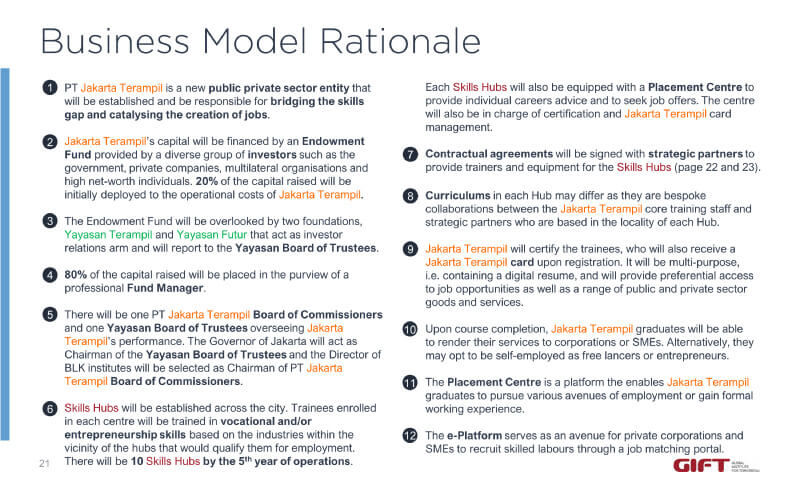 The three-pronged approach to dramatically expand access to vocational skills training consisted of the creation of a public-private sector entity, establishment of an endowment fund, and purpose-built Skills Hubs. JT would facilitate the provision of vocational training, entrepreneurial incubation, and job placements for under-skilled populations. 80% of tuition fees would be subsidised by JT, encouraging and facilitating the participation of poor, disadvantaged youth. JT would also provide a membership card, containing a digital resume and providing membership to e-Platform: an integrated set of interactive online services that provides trainees with information, tools and resources. 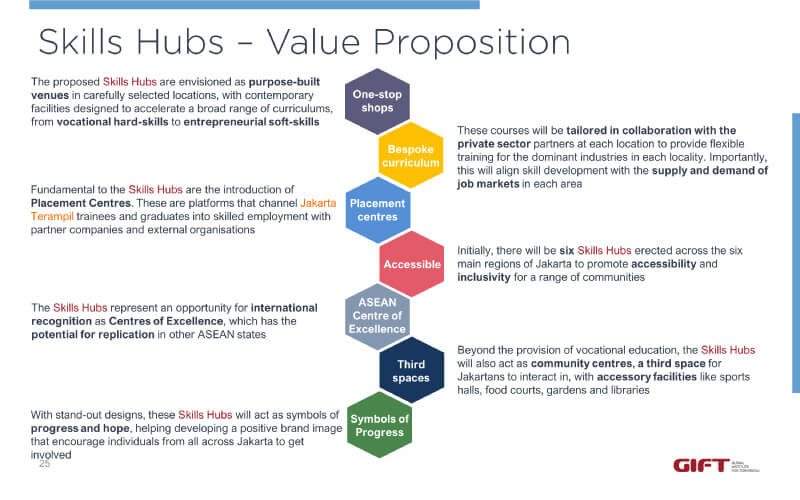 One of JT’s primary responsibilities would be to create and manage purpose-built Skills Hubs. The function of these hubs is to leverage public-private partnerships to deliver customized curricula to students, and open pathways to employment. Hubs would consist of separate classrooms teaching the development of active skills (e.g. IT, hairdressing), entrepreneurial education, and learning towards heavy industry. Programmes would be “blended”: 20% in the classroom, and 80% practical learning. Trainers would be a permanent team of core staff with industry expertise.

JT’s operations would be funded by an endowment fund, titled “Yayasan Terampil” (YT), or “Skilled Foundation.” YT would be financed by public, private, multilateral and civil society investors that share a common interest in improving livelihoods for Jakarta’s most disenfranchised. GIFT’s proposal required an initial capital raising of $100 million, with 20% being used as initial funding for JT and the Skills Hubs. Alternate streams of revenue for JT included tuition, placement, and job advertising fees, yet YT would be the major source of revenue. 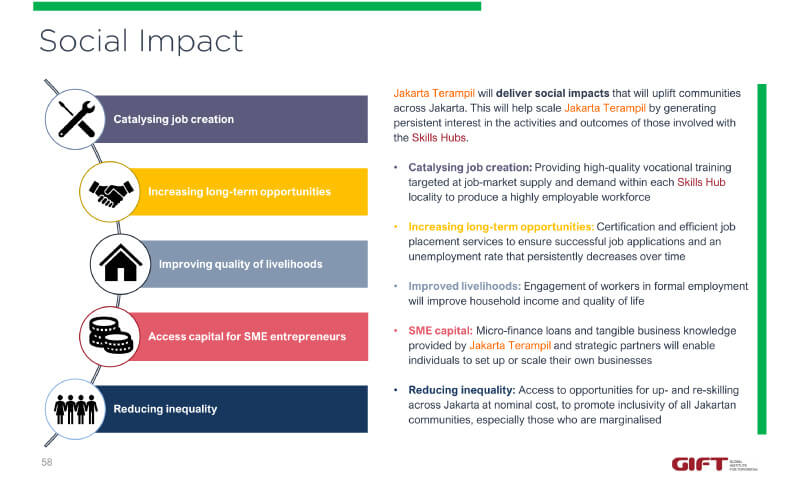 While bold and ambitious, the model contains some risks, such as lower-than-targeted endowment contributions or a limited supply of qualified trainers. DKI can pre-empt this by providing tax exemptions for vocational training sponsorship and expedited visa processing for specialist trainers.

The COVID-19 pandemic has already led to 2.8 million Indonesians losing their jobs: a number that will likely grow as the economic effects ripple around the country. Pressure on unemployment will increase as rural populations continue to migrate to the city in search of opportunities. How the government manages this crisis will be critical. Reducing inequality and increasing job growth has always been a critical priority for the DKI, but in this moment, it is a necessity. 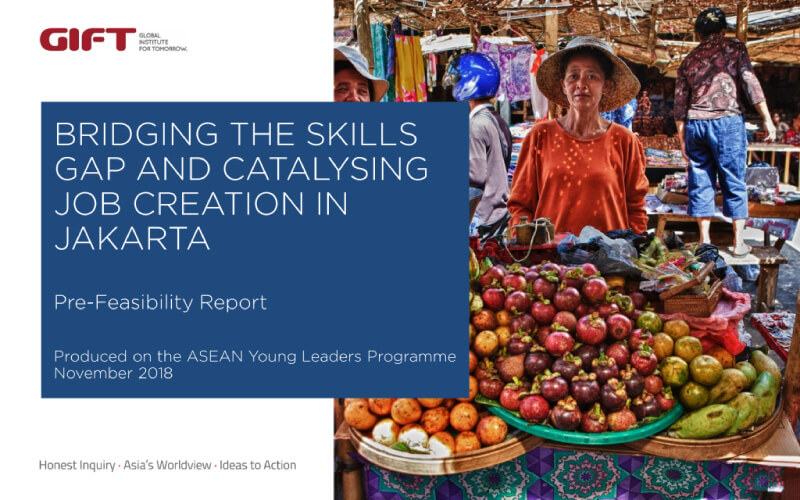 Feel free to read the full output from the 2018 ASEAN Young Leaders Programme to learn more about Jakarta Terampil, and stay tuned for more "New Models for a New World" posts regarding our other project outputs.